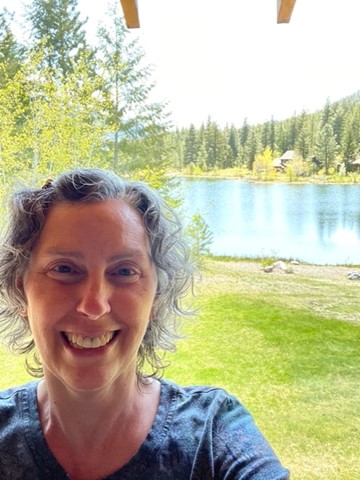 When we’re struck by a tragedy, like a cancer diagnosis or a death, it’s hard to imagine that the world can keep moving. We have to focus on our own grief, our own care and it’s jarring sometimes, to be reminded that the wider world is moving on without us.

When Cynthia got cancer, that became her focus. She was originally diagnosed with diverticulitis, but sharp abdominal pain brought her back to the doctor for a rediagnosis of ovarian cancer. While she was waiting for surgery, the tumor perforated her colon, and material from her bowels entered her abdomen and intestines. That complicated the surgery and lengthened Cynthia’s stay in the hospital to over two weeks. The partial colectomy also meant that Cynthia had to have a temporary colostomy bag.

Before cancer, Cynthia was working at a local hospital and was planning her wedding with her fiancée, Michael. Now, she was in the hospital, unable to work and planning her chemotherapy treatment.

Cynthia was in her first round of chemo, when she got the sad news that her mother had suffered a stroke. Between her appointments and her physical side effects from treatment, Cynthia was unable to leave to visit her mother for weeks after the stroke. She found herself having to manage her mother’s care over the phone, while continuing her own chemo treatment.

“The world doesn’t stop when we get cancer,” Cynthia remembers. Even if we’re not ready, the world keeps going.

Finally, after weeks of waiting and arranging her care schedule, Cynthia was able to make the trip two states over to visit her mom. The trip came just in time, as her mother passed away two days later.

The sad news forced Cynthia and Michael to suspend their wedding plans. “We had planned a big wedding scheduled for July 2020, but then my Mom died, and we called it off. It was too much to deal with cancer treatment, her death, and planning a wedding.”

After her first round of chemo ended, Cynthia went in for a second surgery, to remove additional nodes, as well as her remaining ovary and tube. During the surgery, doctors were also able to reconnect her colon. “I’m just glad to be able to poop like a normal person again,” Cynthia said. “Sometimes when I’m feeling discouraged, I remember to be grateful for that.”

During the second round of chemo, Cynthia and Michael had their wedding. It was small with just a few friends. “Covid would have canceled the big wedding anyway. We had a wonderful wedding.” Cynthia remembers.

Cynthia finished treatment in the spring of 2020 and began a two-year treatment of parp inhibitors. For her, the emotional and mental side effects of cancer were worse than any of her physical ones. She struggled with anxiety, panic attacks, and feeling easily overwhelmed. She credits her support group, her husband, and her counselor for getting her through her toughest times.

Her advice for other survivors is to let the people in their life help them. “People are looking for ways to help. Let them cook for you or get something for you. Accept help.”

Cynthia finished parp inhibitors in April and is currently in the monitoring phase. She is working on getting stronger, so that she can go hiking in the Cascades and be around horses again.