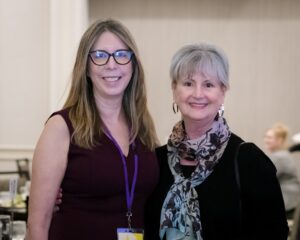 Six years ago, Brenda Helget had just helped secure a major gift for the Buffett Cancer Center at UNMC. In her role at the University of Nebraska and at Methodist Hospital Foundation, she worked with countless doctors and specialists to help raise money for cancer research and treatment, but she wasn’t at all prepared to become a cancer patient herself.

In November 2016, Brenda went in for her annual mammogram. She was about six months late but wasn’t concerned. Six months isn’t that long and she felt fine. But she wasn’t fine. The mammogram showed a mass and she was sent straight to get an ultrasound. The doctor showed her the screen – not just one mass in the breast, but another mass was in her lymph nodes. A biopsy was scheduled for later that afternoon and confirmed a diagnosis of breast cancer.

“I was in shock,” Brenda recalls of that day. “That whole month is just a blur.”

Brenda gives credit to her friends for being her support during the first month of treatment. “One of my dearest friends came over right after I was diagnosed and just looked at my house and said, ‘Brenda, you can’t live here. There’s too many stairs, you’re not going to want to climb up and down all day when you’re not feeling good. You’ve got to move.’ And she was right.” With her help, Brenda found a one-story ranch and moved in by Thanksgiving.

Brenda’s doctors chose a new method of treatment by trying to shrink the tumor before any surgery, so on December 2, Brenda started 8 rounds of chemo. “Chemo was rough for me,” Brenda remembers. “I went every two weeks and the first week after treatment, I could hardly move.” Fatigue, constant nausea and a metallic taste made eating nearly impossible for days. “About all I could stomach were ginger snap cookies and vanilla bean frozen yogurt.” Her difficulty eating caused Brenda to lose 30 pounds in one month and left her with food anxiety that lingered months after her treatment ended.

The chemo worked, though. By the time they went in for surgery, the tumor had shrunk to the point that her doctors were able to remove it with a lumpectomy. After another biopsy surgery and six weeks of radiation, Brenda became cancer free.

She continued fundraising for the University of Nebraska Foundation and then at Children’s Scholarship Fund of Omaha, until she was approached in late 2020 by a friend looking for advice on finding an Executive Director for A Time to Heal Cancer Foundation.

As she listened to her friend describe the foundation and what they were looking for, she thought, “This is why I got cancer! So I could help other survivors.” Brenda is honored to continue Dr. Stephanie Koraleski and Dr. Kay Ryan’s legacy and use her experience in nonprofit, fundraising and as a cancer survivor to guide and shape A Time to Heal into the future.